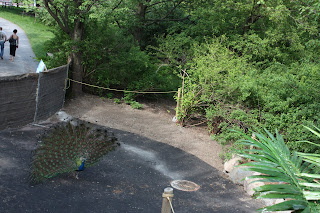 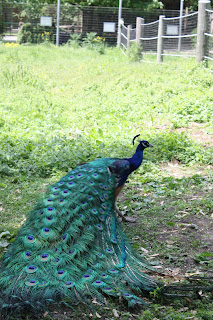 ...am sharing yesterday's peacock sightings with you. Isn't he a handsome fellow? If only their cries were a lovely as their feathers! If you've never hear a peacock's cry before, look it up on YouTube and you'll see what I mean :o) 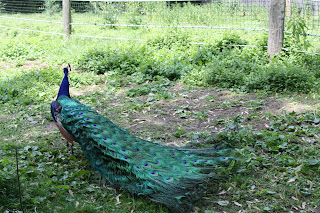 ...did the laundry and was most disgusted when I came across a Frenchwoman who lives in my building and who, by some odd coincidence often does her laundry at the same time as me. She was heading out of the laundry room while I was heading in and she looked most uncomfortable as she told me that she had removed my clothing from its washer. No bloody kidding!!! I was downstairs at the most two minutes after the machine stopped and she already had all of her clothes in the TWO washing machines and was on her way out. I'm pretty darn sure that she took my clothes out during their final spin cycle. I can't stand having people touch my clothes and therefore never, ever remove anyone elses clothes from the washing machine unless I have been waiting for over five minutes after a machine has stopped. It's a good thing I didn't come across her again, otherwise I might have had a bit of trouble being civil.
...went grocery shopping. Normally grocery shopping is quite an ordinary experience, but it was enhanced today by a woman getting caught stealing ten steaks and then very loudly resisting arrest. This is not the first time there has been theft at my grocery store. I live in a very safe neighborhood, but there are a few 'special' people who live in the slightly less safe neighborhood a five minute walk from my place where the grocery store is, namely a few kleptomaniacs. The last time I heard of theft in my grocery store, it was a lady who had tried to leave with a large number of bottles of wine. I have a sneaky suspicion it may have been the same woman. She should try stealing dish gloves, they're much easier to hide.
...made chocolate raspberry bread. It is currently baking and smells divine! You can see the recipe for it here.
Posted by Karine at 18:59

Email ThisBlogThis!Share to TwitterShare to FacebookShare to Pinterest
Labels: food, Today I..., zoo