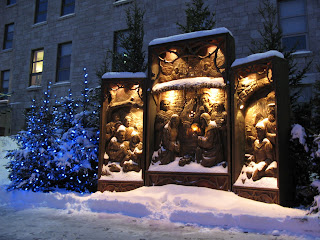 ...was thrilled when it only took me the usual 20 minutes to get to work rather than a half-hour like yesterday. Not having had to deal with half-hour traffic jams to get to work every morning in over a year now, 10 minutes stuck on Queen Mary Road in the bus seems like forever.

...relished in the much more laid back atmosphere at the office today, we are feeling much more care-free than we have in a while, actually, but it really was like night and day compared to yesterday.

...gave a tour to some of the most interested 10th graders that I've ever seen at the Oratory.

...was mildly miffed when the organist started practicing in the Basilica AFTER I had started showing the kids around there. I have a powerful voice, but I cannot compete with an 8 story tall 5 811 pipe organ.

...Toor a picture of our big outdoor crèche before walking down the hill after work. It's mildly blurry, but keep in mind that I was trying to stand still against 60 km and hour winds while shooting this, it was the best shot I could get since I had no tripod.

...had a nice chat on Skype with my Sweetheart for the second time this week and loved to hear the smile in his voice as we spoke and the sound of his laughter as we teased each other and joked around.

...remembered I had to go and do some ironing if I want to have something decent to wear to work tomorrow. Better get to it, I had forgotten all about it again.
Posted by Karine at 21:09

Email ThisBlogThis!Share to TwitterShare to FacebookShare to Pinterest
Labels: boyfriend, oratory, Today I...