Yesterday I...and Today I... December 20th and 21st, plus a blogging hiatus

First off, I apologize for not posting yesterday, but I had no time at all...between the holidays and birthdays and work, I find that I lack the time and energy for daily posting these days and on top of that, I find that very few people have been reading my blog lately, so I've decided to take a bit of a holiday break from blogging with the hope that when I get back to it in January my readership with go back up :o) Keep an eye on my blog throughout the Holidays when you can, because I will post every now and then, but just not every day.

Now, on with the show!

...went out to the West Island for a spa appointment.

...swung by the mall after my appointment and made it in and out in an hour. During that time I found a dress to wear to my cousin's wedding in February, bought gift tags for myself and my mother, had the battery changed in my watch, bought myself a smoothie because I got hungry and took this picture of some children meeting Santa :o) 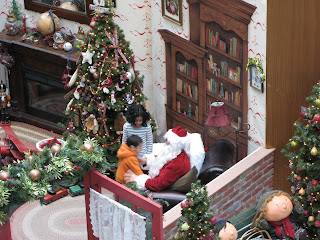 ...visited my mom and took these pictures of two of the creches she has at her place. 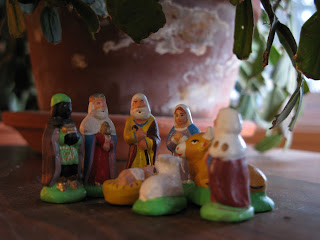 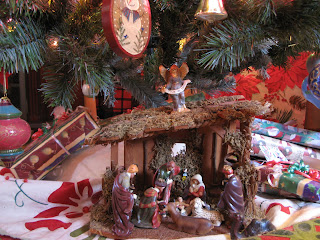 The second one is under her Christmas tree. I set the figurines back upright just for this picture because since she had three German Shepherds, they very rarely stay upright for more than 30 seconds at a time. Pretty creche though, isn't it?

...went to dinner at my grandparents' place for my Grandfather and my younger brother's birthdays. My brother turned 25 on the 17th and my grandfather turned 83 today. Here's a shot of their cake, which is actually a 'Bûche de Noël' or 'Christmas Log', a traditional French Canadian Christmas dessert. 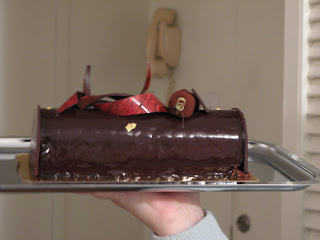 ...could have done with a bit more sleep this morning after my busy weekend. I was slow out of the starting gate and was convinced that I was going to be late to work, but I ended up being right on time!

...gave a tour to a group of immigrants learning french. They're some of my favorite groups to give tours to, this group was particularly interesting since I had students from all different religions in my group, but they were all very, very open-minded which was incredibly awesome.

...had a quiet afternoon after my morning tour.

...got miffed when my landlord wrote to ask me to no longer use my garbage can in the garage to dispose of the used litter from my cats' litter box because it seemed to be causing an upswing in his allergy to cats. He imagines that the fumes from the can are getting to his car which he is parking in the garage for the winter, but I fail to see how this could be possible since A: his car is closed, how would he have these fumes get in? and B: the can doesn't smell!!! I asked him if I could move the can into the furnace room if we kept the door closed (which it always is anyhow), but he said no because the can gives off a bad smell! It SO does not, unless you're dumb enough to go and stick you nose right in it. So to avoid having to spend all winter freezing my butt off after scooping out the litter every day, I'm going to have to go out tomorrow after work and buy a sealed garbage can. Seems to me that if he's whining about this after I've been using the same can for over a year, he should be buying me the can.

...got even more miffed when I found that my cranky landlord had taken my Christmas Wreath off of my front door. I tripped over it while going to open the door to my friend, ARRGH!!! What gives??? Yes, the lock in the door sticks because of the wreath hanger, but it's MY door!!! If he has an issue with the lock sticking when he uses the hallway to get into the garage or into the laundry room, he can go through the garage until after Christmas, for crying out loud!!! He had now business taking down MY wreath with I paid for and which has been up on the door for two weeks now without telling me first!!! I put it back up there and it had darn well better stay there or I'm giving him an earful!!! You may note a hint of irritation here, and there is. I am becoming increasingly disgruntled with my landlord and cannot WAIT to tell him that I'm moving out this coming June.

...had a wonderful dinner with one of my good friends at our favorite restaurant: Maiko Sushi. This place has, I swear, the BEST sushi I have ever tasted. They have very original 'recipes', like pesto sushi, which is smoked salmon, cream cheese, asparagus and mushroom wrapped in rice which is basted in pesto sauce. Seriously yummy!!!

...started wrapping Christmas Presents. I got two done, it's not much, but it's a start!
Posted by Karine at 21:44

Email ThisBlogThis!Share to TwitterShare to FacebookShare to Pinterest
Labels: apartment, Christmas, Today I...