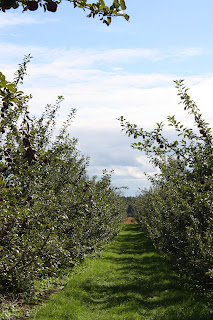 ...am sharing this picture of the apple orchard I was at with my friends yesterday. We had a lovely time picking apples, going out to dinner and then ending the evening in a...sex toy shop. Yeah, that part wasn't planned. We ended up there because the two guys ended up challenging each other over the existence of a particular kind of toy and also because I confessed to being very nearly a sex toy shop virgin. So we went to a big store and my friends insisted on my seeing everything in there. Hoo boy...yeah, it was good for laughs more than anything else!

...had a more relaxed day, which was fine by me because I was so busy last weekend and then I was out all day yesterday! So staying home and doing laundry and catching up on my cleaning felt nice :o)

...got a nice, long walk in when I went out to buy cereal, cleanser for my face and canned cat food.

...spoke with one of my mom's friends and arranged things so that she will be able to come and visit my cats and feed them while I'm away for Thanksgiving weekend.

...spoke with my Sweetheart for a little bit, but he was in a bit of a hurry to get some things done because a couple he was friends with while he was on exchange in Toulouse, France for six months right before we met were stopping in for the night before heading on to Niagara Falls tomorrow and he was running late. That's okay, I'll talk to him later this week. We're due for a good chat though, we've both been so busy lately that we've only been talking for a few minutes (meaning less than a half hour) here and there!
Posted by Karine at 21:25