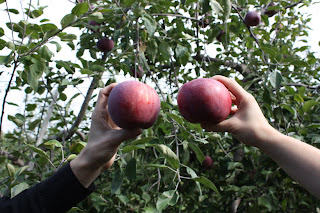 ...am sharing these picture of some of the apples that my friends and I picked on Saturday. The top two were picked by S (on the left) and G (on the right) and won the prize for the two biggest apples on the day, S's apple being the biggest and G's coming a close second. The one below was picked by me and won the 'cruelty to apple trees prize...yup, I sure did feel bad for taking what felt like half the tree with me when I came away with that apple...It never fails, even though I am known for being a very gentle, delicate soul (it's nearly a fault in my case...) I damage at least one apple tree a year, it never fails. 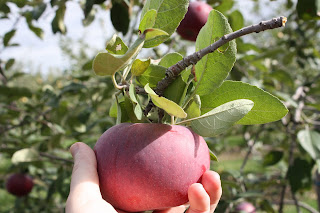 ...wasn't quite as busy at work as I was yesterday, but not far off. With Brother André's Canonization just around the corner (two and a half weeks and counting) the phones are ringing more and more and more and more groups are coming. I won't be going to Rome after all by the way, I'll be staying at the Oratory and helping to run the show from there.

...was supposed to give a tour from 4:00 to 5:30, but the group was late and only shower up at 4:30 and then asked for a half hour tour before bumping it up to 45 minutes after I told them that all they would get in a half hour was a flying visit of the first floor while I took them up to the Basilica and sat them there to give them a brief history of the Oratory for about 15 minutes before bringing them back down. At least with 45 minutes I was able to give them a pretty complete tour of the first floor and the Basilica.

...was so thankful to my colleague D for taking the time to drive me home when the weather at the end of my shift was distinctly monsoon-like.

...washed a pile of dishes while talking on the phone with my grandma B. I never really realize how much is in there until I have trouble finding the bottom of the sink while washing, especially when it comes to the utensils!!!

...was hoping to talk with my Sweetheart, but he wasn't on Skype tonight. I suspect that he may have thrown in the towel and gone to bed early because his weekends have been so packed recently. He's had guests over two weekends in a row and he's coming to Montreal this weekend and then the following weekend I'm going to see him. So yeah, his going to bed early? I'm all for it...the last thing I want is for him to get way too tired and catch a cold or something just in time for my visit! I'll try and catch him on Skype tomorrow is all, I can wait until then :o)
Posted by Karine at 22:13