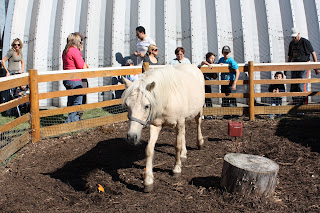 ...am sharing these pictures of the pony that was at the orchard I went to with G two weeks ago. There were all sorts of animals there but this pony and the donkey she shared a pen with were less popular than the others because there was a sign saying that they both bit and to be careful. Well, yeah, they can bite you if you don't know how to feed them properly...I've been around horses for ages though, so I knew how to feed them and got to spend quite bit on one-on-one time with this sweet pony. It made my day :o) 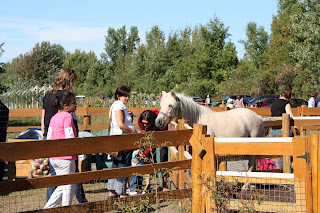 ...had another fairly busy day at work and found that the week seemed to be dragging by. It's probably because of the weather which has been pretty dreary in Montreal this week.

...went grocery shopping after work and ended up having to take my food home on an overcrowded bus. The service on my line has been beefed up since the beginning of the month, so I had thankfully nearly forgotten what it was like to have to ride on a packed bus and didn't enjoy the reminder too much. I guess maybe an earlier bus had broken down and that's why there were so many people on board.
Posted by Karine at 20:53

Email ThisBlogThis!Share to TwitterShare to FacebookShare to Pinterest
Labels: bus, orchard, Today I...