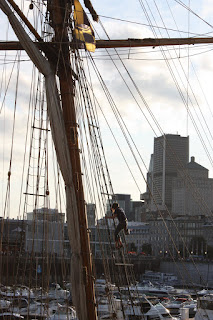 ...am sharing this photo of a crew member climbing of the mast of one of the Tall Ships that were in the Old Port in Montreal this past weekend with you.

...had another busy day at work.

...gave a tour even though I wasn't scheduled for one. A booking got lost in the shuffle on D's desk and a group of elderly people from a long-term care facility were left without a guide, so off I went.

...did some research on natural remedies for fibroids. I was diagnosed with one after an ultrasound last week and was happy to find out that there are natural ways to lessen their effects and even shrink them. I went to a natural food and remedy store after work and bought something to help regulate my hormones which will hopefully do the trick for me, along with stopping the use of soy milk.

...was thrilled when the gun registry was upheld after a very, very close vote. I just wish Prime Minister Harper would let the issue drop now and leave the registry alone. It was brought into being as a result of a shooting spree at the École Polytechnique de Montréal back in 1989 when a young man walked into the school and shot and killed 14 women and wounded many others using an assault riffle and I don't understand how anyone could want it abolished knowing where it came from and what that it is helping prevent similar events from unfolding again.
Posted by Karine at 21:40