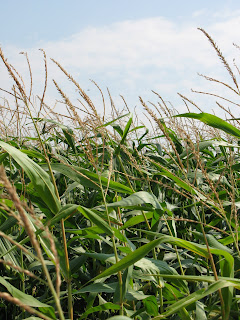 ...am sharing this picture of corn stalks blowing in the wind with you. I really enjoy taking pictures of windblown things, because I love the wind so much as a general rule. Nothing helps me get to sleep like listening to the wind blowing outside my bedroom window, except maybe for chamomile :o)

...was pretty busy at work again, although not quite as much as yesterday.

...went to dinner with my friend V. We tried a new sushi place which we will more than likely not go to again. The sushi was good, but the service was horrendous! We had three different waiters within the hour and a half that we were there and they only brought V's entree as we were leaving after she had gone to tell the manager that she didn't want it anymore because it was taking too long and to take it off of her bill!

...went to Indigo books meaning to buy one book, but came out of there with three books. I also ended up having to renew my iRewards card, which cost me 25$, but I ended up getting 20% my purchase thanks to that, plus another 20% off because of coupons so it didn't come out that much more expensive than it would have had I just bought the books.

...bought my dad a birthday card that is sure to garner some serious laughs at his birthday dinner on Sunday night :o)

...spoke with my Sweetheart for nearly an hour, Sweet bliss :o)
Posted by Karine at 22:17