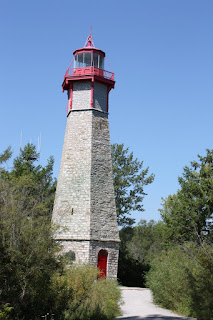 ...am sharing this picture of a light house in the Toronto Islands park with you.

...went out to dinner with a bunch of colleagues after work.

...enjoyed getting home around 7:15 having already eaten. I was able to clean the litter box, have a shower and relax in front of the TV and I'll definitely be able to make it to bed a bit earlier than usual!

...am watching a documentary on the Documentary Channel called 'Scared of My Shadow'. It's all about how the media is harvesting fear in the population, meaning that disasters, abductions, violent crime and terrorism is far less common than we believe, but the media and television networks get high ratings from sensationalist stories and shows and that if we shelter ourselves and our children from everything, they and we will be seriously lacking self confidence, coping mechanisms and defense mechanisms to deal with eventual problems. Very much so, I would have to say...If I compare myself and my brother and my Sweetheart and my cousins with other people I know, we're a lot more daring than others. Moral of the story: the fear of something is often far greater than the actual thing!!! Think H1N1, among other things.
Posted by Karine at 21:40