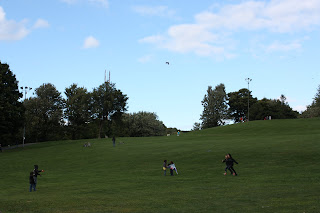 ...am sharing this picture of people enjoying a windy day in Montreal's Mount-Royal park. I took it this past Sunday and if you click on it to enlarge it, you'll be able to get a better view of the kites, one in the air and one that some children are holding. They tried very hard to get it in the air for about 15 minutes while I stood there snapping away, but never quite managed it since they had too much line out and couldn't run enough to get it off the ground.

...had a slightly busier day at work, but not much. We're in the early fall slump, but it probably won't last nearly as long as usual since Brother Andre's Canonization is coming up.

...was happy to see my brother so excited to be back at work, he was starting his new job today. He told me that his first day was kind of boring though, since he spent most of it waiting for his new laptop and couldn't do much without it. He did get roped into joining an NFL pool though, which got him socializing with his new coworkers.

...am listening to the Oratory's Boys' Choir, Les Petits Chanteurs du Mont-Royal, sing Carmina Burana on CBC Radio's Espace Musique. They're live at Place des Arts tonight and Sunday and my colleague C's son is singing with them. They're doing a brilliant job so far, which I'm not surprised about since they're generally a very disciplined and very talented group.

...am also listening to a storm roll in.

...had a kir (mix of white wine and black current liqueur) after dinner and am feeling a bit of a buzz, but in a good way :o)
Posted by Karine at 21:02