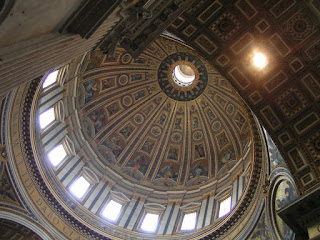 ...am sharing this picture I took in St.Peter's Basilica in Rome when I was there with my Sweetheart back in June of 2006. I'll be back there in about a month.

...went to an information session for the group escorts of the pilgrimage to Rome for Bother André's canonization. It was okay, but nothing more than that. I didn't learn much that I didn't know, but did find out that I'm going to be dead on my feet by the time I get back home. We're going to have to get up at inhumane hours, at least for those of us who aren't early birds with jet-lag in our systems to boot. It's a good thing I'll have three days to recover when I get back, but I'm also going to take several days off in November before the really busy Christmas season comes along.

...think that I will still probably have a good time on my trip, but it's a good thing I won't have to spend more than five days being a group escort because I don't think I could cut it.

...am going to tell my Sweetheart that he was darn right when he told me that I will be a group escort this one time and will more than likely never want to do it again.

...was horrified at the size of the group escort t-shirts they gave us. They were all either large or extra large! Mine is a large and it's so big it could fit both my sweetheart and I plus a third person!!! To give you an idea I'm 5'2'' and he's 6'1'' and I weigh 124 and he must weigh 135, maybe 140 (he's very slim and has lots of muscle). So yeah, the t-shirt is massive and I ended up gathering it up in the back and tying it with a hair elastic I had in my purse so that it would look halfway decent. I'm putting it in the wash tomorrow and throwing it in the dryer and hopefully it'll shrink, like a lot. If it doesn't, I may take it to my grandma G, who is a brilliant seamstress, to see if she can help me make it look decent.

...slammed my living room windows shut in frustration over the racket my upstairs neighbors were making. There's no way they didn't hear me, but the don't seem to care. Hopefully they won't keep it up too late, because I'm kind of looking forward to a bit of an early night to help me get over the horrible migraine I had for about 20 hours from about 6:00 P.M. yesterday to the end of the afternoon.

...am planning on having a pretty quiet day tomorrow.
Posted by Karine at 21:21

Email ThisBlogThis!Share to TwitterShare to FacebookShare to Pinterest
Labels: boyfriend, Rome, Today I...