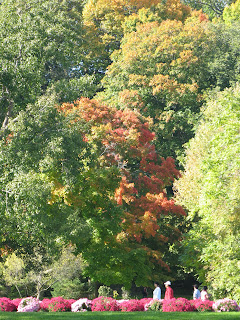 ...am sharing this picture the Fall colors at Niagara Falls when I was there over Thanksgiving two years ago. It was strange seeing colored leaves there because it was actually 27 degrees that day! Everyone had been telling me how cold it would be at the falls because of the mist and everything and there I was standing around in jeans and long sleeves sweating up a storm!

...was without network and internet access at work along with every other employee at the Oratory all morning. There was a two second power cut at the end of the day yesterday and *poof!* the server blew. We couldn't believe something so slight could cause so much havoc!

...found out that my former boss (I worked for a different department at the Oratory very briefly in 2008), JC, who I am very fond of, will be in Rome for Brother Andre's Canonization as well! It feels good knowing that a 'boss' will be there, someone that all us group leaders can turn to in case of a problem, especially a good friend like him.

...got my new iPod, yay! I tried him out and love him and now have him fully charged! I'll try and get some music onto him later on tonight, even though I will mostly use him to listen to the radio. Ooh, and he has a pedometer! That's big fun for me too since I enjoy walking so much, it'll be fun to see how many steps I take a day and how many calories I burn doing it!

...got a surprise visit from my Grandma G at work. She called to see if I was there and heard from C that I was away from my desk but would be back soon, so she hopped on a bus and came to see me and bring me a ring that she had fixed for me (the amethyst fell out of it). I showed her my new office that she had never seen before and we ended up spending about a half hour together and I walked back to the bus stop with her on my way to get lunch. It was a lot of fun having her come see me and she enjoyed meeting a few of my colleagues.

...have had a migraine since just after I got home, which kind of sucks. Hopefully I'll be able to sleep it off.
Posted by Karine at 20:37