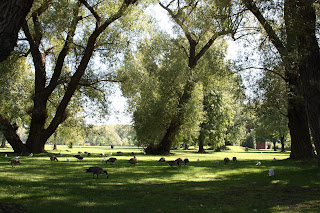 ...am sharing this picture of the many, many geese and seagulls that had congregated in the Toronto Islands park near the Center Island ferry landing on Saturday of last week. I took this shot of them from by the lake, but my Sweetheart felt the need to get closer to them to get his shot and one of the geese was fairly unhappy about that and started squawking at him 'Uh oh, look out honey, that one doesn't look too happy!' 'Don't worry, it's all good!' he called back. And since he was standing still to take his picture and we walked off to take the ferry after, it was. I was a bit worried that the aggressive Canada Goose was going to run after him and try to peck him though! I guess that he might have seen one too many tourists that day!

...went to lunch with my mom and my brother. The food was great, we had a fun time, but MAN was our waiter SLOW!

...went to the mall with my brother after lunch. I was hoping to see the Montreal Canadiens' former goaltender Jaroslav Halak, our hero from last season's playoffs who, in my opinion and in the opinion of many, was treated most unfairly by the team when he was traded to the St-Louis Blues back in June. Apparently he would have cost too much to keep though. Hmph, I'm not forgiving the Habs' management for that move anytime soon, but I digress. So yes, I was hoping to see my favorite Hab after having bought a Canadiens' teddy bear from my dad for his birthday from the Build-A-Bear Workshop, but the lineup to meet him went from the Capsule Sportive store at the southern end of the mall all the way back to the northern end, out the door and all along the western wall to the back side of The Bay!!! Here's a link to the floor plans of the mall so you can see what I'm talking about. It would have been a pretty heft wait and all my brother needed was two pairs of pants and it took him all of a half hour to buy them plus a tie and have the pants shortened, so I gave up on the idea of having the teddy bear's polar signed by Jaroslav in favor of getting ride home since it was raining on and off and I have left my place without my umbrella.

...did my vacuuming, washed the bathroom and washed the sheets and towels.

...had a bath and lost track of the time while I was in there twice, so my grandma had to call me back twice before we could engage in a almost nightly chat. Sorry grandma...

...splurged on myself big time and pre-ordered a new iPod Nano. I already have a touch, but the one thing I always found it to be sorely lacking was FM radio, which my new little Nano will have. He will be most convenient for my walks home and my Touch will still be my staple for train trips and wifi, so I will cart both of them around. The Nano will take so little room though that it won't be any trouble at all having both of my iPods in my purse. Now the big question: could I afford this splurge? Yes and no. My credit card bill is higher than it has been in ages and it will take me two months to pay it off (at least), but I purchased the Nano through the Via Preference store and I got one Preference point for each dollar I spent (159 in all) plus 25 bonus points for every 50$ as part of their back to school special (150 points). That's 309 point in all plus the 728 I already had, so I now have 1039 Preference points, nearly enough for a free trip to see my Sweetheart in Toronto, or enough to get there halfway for free. So my credit card bill is high right now, but I will be saving on my next trip to see my Sweetheart so it balances out a bit...kind of. It helps me feel less guilty about spending so much on myself anyhow.