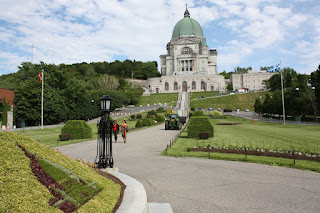 ...am back in the blogging sphere again and am sharing two pictures with you, both of them of the floral arrangements created by the Oratory's incredibly talented horticulturists. The arrangements are, of course, honoring Brother André's canonization. 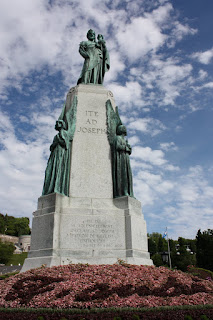 ...am blogging about two days instead of one so I can tell you about my concert, which went incredibly well. My voice held out too, which was great because I was quite concerned that I might lose it.

...am informing you all to beware of the Martinis at 'Il Fornetto' restaurant in the Lachine sector of Montreal. Their food is amazing and when you ask for a litchi Martini, you get an actual litchi in it, but boy, oh boy, are their Martinis potent!!! I am slightly embarrassed but mostly amused by how incredibly drunk I got off of that one Martini and two sips of wine when my friend H took me out to dinner last night. Like my mouth felt tingly and I had to concentrate in order to speak clearly and walk a straight line drunk. Apparently I felt drunker than I looked though, because my friend swore that I just looked very laid back and happy, not drunk. This was a fairly temporary situation as well, I felt a good bit better after ingesting a considerable amount of food.

...went to a walk in clinic for a check-up and to get a referral for an ob-gyn and was in and out in an hour.

...went to St-Mary's hospital for routine blood work only to find out that I would have had to fast for 12-14 hours for one of the tests. They did all the other ones though and I was in and out of there in 20 minutes. A lot of people complain about long wait times in Quebec's health-care system, but I'm happy to say that so far I have been incredibly lucky and have never had to wait for obscenely long periods of time at a doctor's office...except that one time last year when I had to fair two and a half hours for x-rays of my feet.

...spoke with my Sweetheart for about 15 minutes. He had a nice time in Kananaskis over the weekend at a gala for work. I told him about my doctor's visit and the reason for and, curious as always, wanted to know why I had gone hunting for a gynecologist. I told him it was a good idea to get examined once a year and that my last exam went back to 2007. Then he wanted to know what an exam was like, what they looked for. I thought about it for a second and then got a lopsided grin on my face and launched into the desired explanations. When I stopped he said 'Okay, I'm not hungry anymore'. I laughed and said 'Hey, you wanted to know! I didn't even tell you about the details of the actual physical examination yet, don't you want to know about that?' His response was 'No, thanks. My curiosity has gotten me into enough trouble tonight already.' lol The worst part is, that if I hadn't explained things to him, he probably would have gone to look it up on the internet and gotten into the details that he really didn't want me to get into right off the bat.
Posted by Karine at 20:58