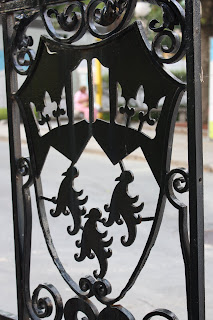 ...am sharing this photo of McGill's crest on its front gates with you.

...had breakfast twice, I had my usual bowl of cereal and then gent out to Cora's for raspberry and chocolate stuffed crêpes and a banana mango smoothie with my brother when he invited me. I could never say 'No' to Cora's :o)

...headed out to the West Island for the afternoon for an appointment and then to visit my mom.

...was tired when I got home, as that was quite the busy day.

...saw my Sweetheart pop onto Skype while on the phone with my Grandma B. Unfortunately though, by the time I got off the phone and had my dinner, he was gone :o( Hopefully he'll be back later as I haven't spoken to him since Tuesday and I miss him.
Posted by Karine at 20:54