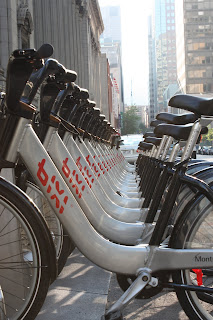 ...am sharing this photo of Montreal's very popular self-serve bicycles, which are called, as you can see, Bixis. This station had just been refilled before I took this picture. You can take a Bixi from any station in Montreal and ride it to any other one and leave it there and city crews redistribute them throughout the day so that no station is left empty.

...had a very, very quiet day at work, but tomorrow will be busier since I have a tour with a school from Ontario in the morning and a meeting for two hours in the afternoon about canonization stuff.

...saw a funnel cloud over part of the West Island this afternoon, Kirkland to be precise. That's the thing about the Oratory, you can see the weather coming for kilometers around, but this was the first time I saw anything so dramatic. Luckily, the tornado was only an F0 and it blew itself out before it could really travel a lot.

...spoke with my Sweetheart for an hour, oh how lovely that was! We hadn't spoken in close to a week because he ended up having to go and work at the factory where he did an internship for a month on Wednesday and Thursday last week. He worked way too late both days and then got sick Friday into Saturday (he's allergic to work...no, seriously!) and voilà, the perfect ingredients for a very silent boyfriend. I'm going to make sure that I get to talk to him tomorrow though, because he's leaving on Vacation for a week and a half on Wednesday and although he's bringing his little laptop with him, there are going to be five of them for the one computer...that may be quite the line-up, so I'm going to stock up on Sweetheart time tomorrow.
Posted by Karine at 21:34