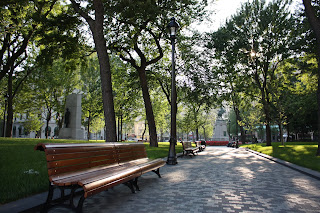 ...am sharing a picture I took this afternoon of Dorchester Square, one of Montreal's many parks.

...slept in and it felt lovely.

...had a quiet start to the day before heading out to an appointment.

...came home and did my laundry.

...spoke to both my grandmothers and my mom.

...had plans to meet up with a friend for dinner before heading out to the fireworks competition either with her or by myself. This plan was foiled, however, when she left me high and dry in favor of an evening with her boyfriend and one of their friends. I was upset by this and it made me feel quite lonely suddenly. I started seeing couples everywhere. I could have gone out to dinner and the fireworks on my own, but had absolutely no intention of making my lonely state worse by eating out in a restaurant by myself on a Saturday night. I wandered around Downtown for a bit taking pictures so my trip into town wouldn't be made totally pointless and then go on a bus and called my brother. He felt bad for me and told me that he was having a friend over for a barbecue and that I was welcome to join them. I didn't want to though, I was officially miserable and didn't want to out anywhere but home. I also hate it when people feel bad for me because my boyfriend lives out of town and they think 'Oh, poor her, she must get so lonely.' Actually I'm fine most of the time, but certain things, like being bailed on so my friend can hang out with her boyfriend, will make me feel pretty darn crappy, especially since not once in my six years with my Sweetheart have I ever bailed on her or any other of my friends in favor of an evening with him. I either bring him along or meet up with him after, simple as that.

...was most upset by the mess I saw a bunch of thugs (they were not protesters) making of Toronto. See the mess these summits make? They should only ever be held on military bases or in bunkers in my opinion, all the leaders ever do is have fortresses built up around their meeting places anyhow, so they may as well go have their summits where there are already fortresses and save all those billions of dollars in security expenses and lost money for businesses that are either shut down to protect themselves or are destroyed by thugs.
Posted by Karine at 23:00

Email ThisBlogThis!Share to TwitterShare to FacebookShare to Pinterest
Labels: Today I...