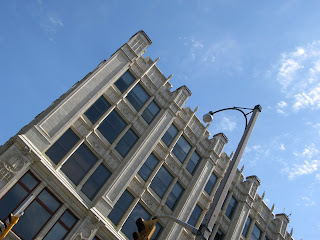 ...am sharing this picture of the Much Music building in Toronto with you. I'm pretty sure it was a library at some point, but yeah, it now houses the Much Music studios.

...was so very relieved and happy to finally talk with my Sweetheart. I was afraid, earlier this evening that he was avoiding me because he signed in to Skype as 'Away' so I knew he was doing it on purpose. I sent him a message on Skype and bluntly asked him to please stop doing it if that was what he was doing because it would end up making me sick eventually, literally. I told him I would beg if I had to, but it turned out that I didn't need to because he answered me almost right away and said that of course he wasn't avoiding me, he was just eating dinner, doing laundry and then going to get his groceries and that we could talk we he got back from the store, if I wanted to. Well, DUH!!! Of course I wanted to. He told me that he hadn't read my e-mails from the weekend and yesterday day yet though. Well, I wish I could say I was surprised about that, but I wasn't. He's notoriously slow at reading e-mails.

...found out that the incident that his sister wouldn't tell him about on the phone on Friday night was a flood in his condo. She hadn't wanted to tell him on the phone so she wouldn't spoil his evening and didn't want him to come home to find his place just like that. The flood came over from the neighbors' place and warped his floor and soaked the wall, so he had to spend all day Saturday pulling up part of his hallway floor and taking down part of the wall which was moldy...and now he's coughing because he couldn't find a mask to wear. I felt so bad for him when I found out about that because he and I and his brother and one of his friends spent hours and hours renovating his place when he bought it and he had just finished most of it before moving to Toronto.

...found out that a crazy barricaded himself in the basement unit of the apartment building across the street from mine this morning with his pregnant roommate and was threatening to set the place on fire. The finally talked him out of there this afternoon and the woman is fine, thank heavens. It's so strange when something like that happens in your neighborhood, especially if it's a quiet one like mine!

...felt extremely ill and nearly passed out when diesel fumes from the generator on the roof got into my office building's ventilation system. What kind of a fool puts a generator right next to an air vent on a building's roof? My Sweetheart just couldn't figure that out and said that that engineer must have graduated at the bottom of his class for darn sure.

...am wondering if I'm gradually becoming lactose intolerant. I have been getting heartburn for about two weeks now and never have before. Very strange indeed.
Posted by Karine at 22:31