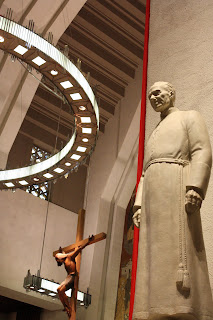 ...am sharing this picture of the statue of Brother Andre in the Oratory's Basilica with you, it being his 165th birthday and all. We celebrated his birthday today at the Oratory as we do every year with a mass at 2:00 P.M. in the Basilica paying special attention to the ill and the handicapped who are given a special blessing during the service. They also had a candlelight procession to the original Oratory after the 7:30 P.M. mass. This is the original Oratory here: 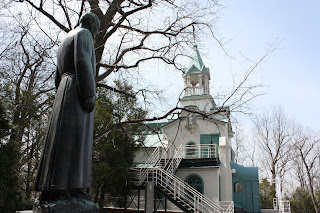 There's a statue of Brother Andre out there, too, as you can see. That picture of the Chapel doesn't quite do it justice as its a shot from the side. There wasn't always a wooden staircase outside the original Oratory, the added it after sealing off the inside staircase to Brother Andre's room under the steeple because the steps were too narrow.

...am apologizing for not posting last night, but I was grumpy. Like really, really grumpy, so bad that even after talking with my Sweetheart for nearly 20 minutes, I was still not feeling all that much better. That's the first time that ever happens, he can usually always fix a case of the grumps for me, but no such luck last night. Therefore, instead of posting, I went to bed to put myself out of misery.

...started really feeling better after lunch. Thank Heavens for that, I hate being grumpy, especially when I don't know why I'm grumpy. At least when I have PMS I can declare temporary hormonal insanity, but that was not the case with this bout of grumpiness.

...sang 'Cher Frère André, C'est à ton Tour' with the rest of the congregation at the 2:00 P.M. mass with a smile on my face. It was the first time in eight years, that I can recall at least, that the Father leading mass had us sing a birthday song for Brother Andre. But hey, at 165, the fella deserves it!

...was happy when no one flipped out over being barred from access to the Basilica during the organ factors' conference's private organ concert this afternoon. I'm used to having to guard church doors at the Oratory and am equally used to verbal abuse from people who want to go into the churches despite my informing they cannot (because of a recording, funeral, graduation, mass, private concert, filming, it's just too darn full already etc...). It usually goes along the lines of 'This is church, you can't stop people from going in, you should be ashamed of yourself!' But that didn't happen this afternoon, people just stood back patiently and listened to the concert from outside the doors and then went in. I love tourists and pilgrims who are Zen :o)