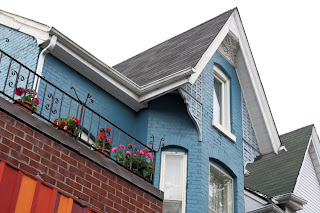 ...am sharing this picture of a house in the Kensington Market neighborhood of Toronto with you.

...keep getting flashes of the Michael Buble concert I went to with my mother and my brother with last night. It was a great show. I was skeptical about whether I would I enjoy it or not as I kind of got Michael Bubled out while living with my mom since she would put his CDs on in a loop, but he's gotten some new repertoire since I moved out into my own place and he is much better in person than on a CD. He really puts on a great show and has a hilarious sense of humor.

...am wondering where all the people who used to read my blog have gone? I used to get way more hits in a day than I do now, but things have been dead for about a month. Am I boring or is it just because it's summer. I'll admit that not getting very many readers isn't really encouraging when it comes time to write a post. Anyhow, I'm hoping that it's just because it's summer and people are on vacation or enjoying time outside. Maybe I should join a photo blog community?

...spent 70$ and small change on groceries. Seemed like I was out of just about everything...and it felt like it too when I had to haul the bags up to my apartment!

...Couldn't get the cold water in my shower to turn off when I was done washing, the janitor is in here to fix it now, hopefully he'll be able to do it!

...am going to a friend's wedding reception. She and her husband get married in Korea last month and they're having a party here tonight for all of their friends who couldn't make it to their actual wedding ceremony.
Posted by Karine at 15:07