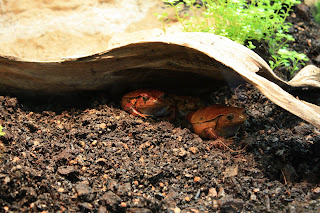 This week's Camera Critters feature is another picture from my visit to the Toronto Zoo, a pair of camera shy frogs that I found to be quite cute. I've always enjoyed frogs and toads and love trying to catch them when I was little and was actually quite good at it because of my patience and how quickly and quietly I could creep up on them. I was also, actually, the only person who, in the over ten years my grandparents lived in Florida, managed to catch one of the many lizards that ran around their property. So yes, creepy crawlies don't bother me, as long as they're not huge snakes and as long as they're not actually inside the house. That's a whole other ball game. I'll actually touch any reptile or amphibian as long as it's in a controlled environment like a zoo though, even huge snakes. I just don't like coming across snakes in nature, that's just creepy. I actually wouldn't step foot in one of the lakes we were staying at as a child after seeing a massive water snake in it. But a pair of frogs like these guys? No problem :o)

I hope you all have a great weekend and don't forget to go and check out all the other critters there are to see on the Camera Critters blog .
Posted by Karine at 11:27