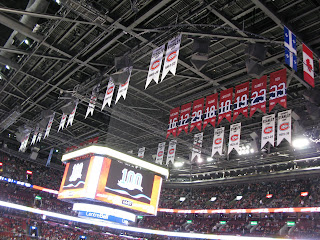 ...was feeling kinda run down. Hormones and stress from the upcoming move I think, but I felt better after getting home and relaxing for a bit.

...recruited nearly all the tour guides for next week's tours. Not as easy task as so many of them are on vacation or in final exams at this time of year.

...gave an end-of-the-day tour to a group of high school students. It went quite well as far as tours with teens go. I always say a tour with teens is like a box of chocolates, you never know what you're going to get. Sometimes they're really into the Oratory and Brother Andre, but sometimes they couldn't care less if Brother Andre appeared right in front of them and stuck his tongue out at them for being so disinterested. Usually they're somewhere in between though and I'm actually pretty good at getting through to them, or at least some of them. The key is not to give up on them and make sure your stay interested in the tour even if they aren't. Usually if you act like what you're talking about is fascinating, they'll get into the game sooner or later :o)

...went grocery shopping since the weather turned out to be way better than expected today, it was sunny by lunchtime and went up to 13 degrees. Most of the snow from yesterday has melted away, thank heavens! A lot of trees lost branches due to the weight of the snow though, it was really wet. I always find it so sad to see trees with broken branches :o(

...spoke with my sweetheart for nearly 45 minutes on Skype. We followed the last period of the Canadiens' game online by listening to NHL radio and constantly refreshing the Habs' homepage to get the most up to date and score. And guess what? THEY WON!!! The kicked the best team in the league out of the playoffs!!! Never underestimate the Montreal Canadiens, you will be very, very sorry if you do :o) If we keep this up, we just might win the Stanley Cup :o)
Posted by Karine at 21:43