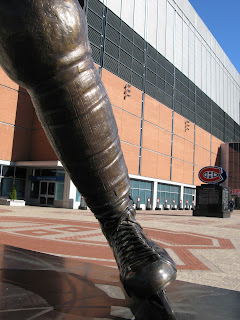 ...had a rather...okay, let's say it, dull day. It was cloudy and chilly and I wanted nothing more than to go out anyhow, but I had boxes to pack and laundry to do so I...

...started my laundry at 1:00 and finished it, folding and all, at 7:30. Yeah, it took me that long. My washing machine works fine, but my dryer is antiquated and I have to run it for 1h40 minutes if I want to have chance of my stuff drying properly. Sometimes, depending on what's in the load and the size of it, I have to run it for another half-hour after that. So at 25 minutes per wash and 80 minutes a dry it takes me ages to do my laundry and today I had three loads to do since I decided to wash my sheets as well as my clothes. I may have to pay to do my laundry in my new place, which I don't here (otherwise the landlord would have replaced those machines long ago, trust me...), but I'll be perfectly willing to pay to have efficient machines and be able to go down and use two or even three at a time, toss my stuff in, wash everything at once and then dry everything at once and be done my laundry in two hours at the most instead of four at the least!!!

...packed three boxes and will maybe do a fourth, but I'll see. There's nothing stopping me from doing it tomorrow morning along with two more when I'll have more stamina.

...spoke with my Sweetheart on Skype. His parents has to go to Poland a few weeks ago, his father for five weeks and his mom supposedly for two, but now she's caught over there because of the volcano that's erupting in Iceland. There's no telling when she'll be able to make it back, but on the positive side, there are worse places to be caught that in your homeland, at least she can stay with family and isn't camped out at an airport or having to pay a King's Ransom in hotel fees.

...am keeping an eye on the hockey game, it looks like overtime again.

...am renting 'The Princess and The Frog' from Disney off of iTunes. I packed up all my DVDs today except for the X-Files ones I bought last week, but I've just about worked my way through those, I'll be renting until I move when I want to watch a movie.
Posted by Karine at 21:37