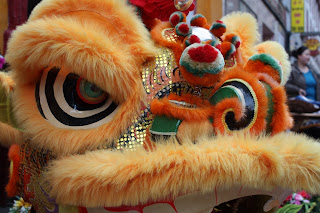 ...had a busy day. I slept in and then finished my laundry right after getting up.

...ran out to buy frozen fish food (it's way better for fish than flake food, flake food actually considerably shortens the life of fish) and return a movie.

...was very touched when a little girl randomly gave me a beautiful little blue flower she had picked while I was walking home from the Metro :o)

...went to buy cat food and litter with my friend G and her boyfriend. G and I were planning on going out and they agreed to help me buy my cat supplies since I have no car and would have had to make two trips to the store to get cat litter and bag of food. There's just no way on God's Green Earth that I could carry both home.

...went to see the Tiffany Glass exhibit at the Musée des Beaux-Arts with G, it was absolutely beautiful, especially the lamps and stained glass windows from the Erskine and American church. The museum bought the church in order to turn it into a gallery and expand the museum while preserving its facade and stained glass windows and the windows were removed from the church while they refit it, allowing the public to see them up close.

...went to Chinatown with G after leaving the museum. While we were walking to the Metro to head home, I told G how I couldn't believe I hadn't taken a single photo all day despite hauling my camera around and then, barely a minute later, looked down a street to see some Chinese dragons sitting in front of a shop. Aha! It was 1$ to take a picture of the dragons, out of respect for them since in Chinese culture, they bring good luck. Into my bowl went my loonie and I happily snapped away, taking six pictures of the dragons, four of which I kept :o) 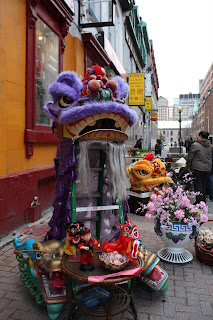