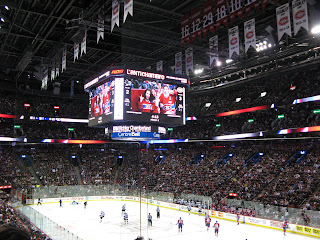 ...heard this typically Montreal exchange on between my bus driver and another passenger on the way home from work:

Passenger: 'So, what's the score gonna be tonight?'

Bus driver, who is wearing a Canadiens jersey and cap (in French): 'Pardon?'

This is typically Montreal in several ways: Montrealers always find a way to communicate with each other, even if one person speaks no french and the other no English. We just figure it out because we have to live with each other day in a day out. From what I can tell, sign language, blatant facial expressions and images can be very helpful, but I'm perfectly bilingual (the best way to be in Montreal), so I'm just guessing at this from watching people less fortunate than me figure out how to get their messages across. In this case, images and the powers of deduction helped, as well as the fact that French Canadiens use the word 'score' as well and our hockey team's name is the same in English and French. Another way in which the exchange was Montreal is that even though the odds are stacked way, way, way against the Canadiens winning this playoff series, we Montrealers still strongly believe they can win it. We know our team, they do well under pressure. How do you think we managed to win 24 Stanley Cups? Nobody is ever going to beat that record, the next team behind us for the number of cup wins is the Toronto Maple Leafs with 13! Sorry fellas, there's just no way...:oJ Especially since we did end up winning the game tonight. Who knows, maybe we can make it 25!
Posted by Karine at 22:25