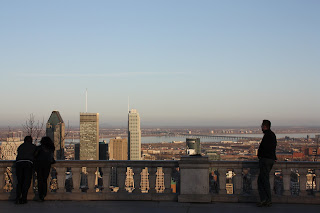 ...went out for a spa appointment in the morning and then spent the better part of the afternoon doing laundry and cleaning.

...heard something fall somewhere in the hallway leading to my apartment and peeked out the door to see what Magique had knocked over this time, only to find her sitting in the hallway looking up at me with an 'It wasn't me, honest!' look on her face. I opened the door to the laundry room and saw my bottle of laundry detergent on the floor. It had fallen off the washing machine due to the vibrations during the spin cycle and when I went to pick it up I found out that the top had cracked and that about half of what was left in the bottle had leaked onto the floor. I was pretty ticked off and it took me a good half hour to clean up the greasy, soapy mess on the laundry room floor.

...was thrilled when my Sweetheart called me around 3:00 to invite me for a late lunch-early supper and a walk through Downtown Montreal and Mount Royal Park. It had been ages since we had been able to walk in the park and Downtown together and it was absolutely lovely out. And here is a big first for most of you, that's my Sweetheart on the right hand side of that picture up there! Click on it and you can get a better view of him, but no, I'm not going to show him from any closer than that :o) I'm not big on putting recognizable pictures of anyone (including myself) online anywhere other than on Facebook where my security settings are pretty much maxed out. But still, you can tell that he's quite the tall, slender, dashing fellow, can't you?
Posted by Karine at 22:45