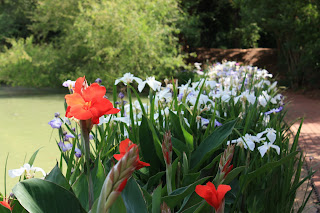 ...am sharing of photo of the irises and other lily-like flowers lining the shore of the lake in Hopelands Gardens in Aiken, South Carolina. They were even more enchanting to see in person :o)

...gave a tour to a group of high school seniors from Lafargeville, NY. They were wonderful and adorably funny as they tip-toed around the issue of whether I could speak English or not before they hear me talk. Then they all laughed when I told them not to worry, that my English was fine :o)

...had a quiet afternoon after my morning tour and watched the clock tick down to the weekend.

...was creeped out by an old weirdo in the subway station who was either drunk as a bottled owl or high as a kite or maybe both. He was going after all the women in the station and I was relieved to see the station attendant calling him in to the cops when I got upstairs. As a side note: subway stations in Montreal are generally extremely safe in the nearly 10 years since I've started using the subway very regularly, this was only the second time that I ever felt truly threatened and it was also only 8:30 P.M. when this happened. The other time was around 11:30 P.M. and I was waiting outside the same station at the bus stop. So please, if ever you are in Montreal, you don't have to feel unsafe using our transit system. Incidents are few and far between and are usually dealt with in a very timely fashion. Random creeps turn up anywhere you go, even in little bitty towns. And actually, I find that they're more dangerous and creepy in little bitty towns, because there are fewer people around to help you if there is a problem. In this case, trust me, if the guy had come any closer to me and I had screamed, about five other guys would have dealt with the creep. Fortunately that wasn't necessary as the creep ended up yelling and cursing at me in a very slurred voice because I skittered out of his way and ran up the escalator. Doesn't he sound like a charming fellow?
Posted by Karine at 21:11