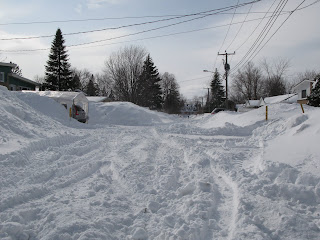 So here, finally, is my Skywatch post! I thought the wires gave the sky a funky look in this photo :o) Sorry to be so late with this, but I've had quite the day which included a conked out subway line and a problematic shower door...

This post is a bit in the spirit of things to come. For those of you who have never seen what winter can be like in Montreal, here's a bit of a glimpse. This is what a street can look like after a major snowstorm at the end of winter when there has been major snowstorms every two weeks without fail since mid-December. That's what the winter of 2007-2008 was like and this picture was taken after the last snowstorm of that winter, on march 9th 2008. We thought it would never end...

I hope you all have a great weekend and don't forget to check out other great Skywatch photos here.
Posted by Karine at 22:11