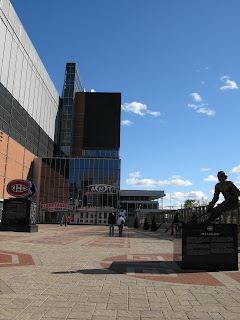 I took this week's Skywatch shot about three weeks ago while on my way to an orchid exhibit with a friend. You may be able to tell from the red, blue and white CH toward the left, that this plaza is right outside Montreal's Bell Center, home to our famous NHL team, the Montreal Canadiens. The plaza has been redone in the last year in honor of the team's 100th anniversary and is filled with paving stones (only the red and white ones) that were bought by fans and that have their names and messages of encouragement to the team inscribed on them. Encouragement that we have been needing this season since our team is pretty much all new and is still trying to work out their chemistry. We're still not doing as badly as the Leafs, though, that would be absolutely horrendous!!! ;o)

Have a great weekend and don't forget to go and check out more Skywatch photos here
Posted by Karine at 20:22