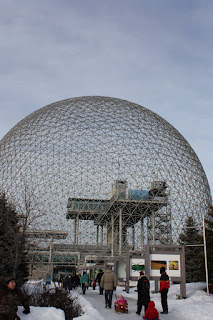 ...got my weather wish from earlier this week. The rain and freezing rain are only going to be moving in tonight, so I was able to head out to Jean-Drapeau park out on Montreal's St-Helen's Island. It's a man made island that was built as the venue for Expo '67, the international exhibition. Some of the aquatic events for the 1976 Olympics were also held there, like the diving, swimming and rowing competitions. Now the old American Pavilion (seen above) houses the Biosphere and the French Pavilion became the Montreal Casino. I'm not giving you the direct link to the Casino because it doesn't actually give you any info about the building that houses it, just a really flashy gambling incentive ;o)

...had a very nice exploratory walk around the park and took 130 photos. I'll try and post one or two every day this week :o) 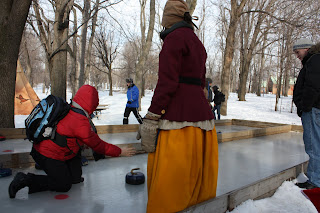 ...really enjoyed seeing all the families out enjoying the Winter festival, my favorite sight was two ladies in period costumes initiating people to curling! For any of you who might not appreciate curling, here's one reason to: I'm a product of the sport!!! My parents met in a curling club their parents were playing at and I learned who to throw curling stones before I could even really walk and still remember how to do it properly to this day! So there :op

...finally installed my photo printer but was most disgruntled to find out that printer companies have become cheap since I last got one and no longer include paper with their products. I was longing to have a child nearby so I could have said: 'When I was your age, printer companies gave you enough paper with your new printer so you could go one year without buying your own!' Okay, so maybe we couldn't go a year without buying some, but at least a month or two. As it is, I'm going to have keep printing stuff at work for a while, namely a new copy of the reading I have to do at my cousin's wedding in two weeks because I had use one page for the test print and the printer chewed up the other one which was my first try at the test page. Nice...

...was most amused by the enjoyment my cats got out of the printer's empty box and then by their reaction to the printer when it turned on. Let's just say they don't really like it that much! lol
Posted by Karine at 21:20

Email ThisBlogThis!Share to TwitterShare to FacebookShare to Pinterest
Labels: montreal, Today I..., walk