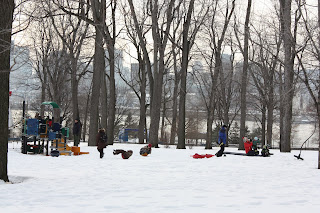 ...am sharing a picture of children playing in one of the playgrounds in Jean Drapeau park with a view of Montreal behind them. Can you see it through the trees across the river?

...was very, very tired, despite having slept nearly eight hours. It's a hormone thing, what can I say?

...was very happy when my colleague 'C' found out that her husband had succeeded in getting their eldest son on a Canadian Forces flight out of Port-Au-Prince thanks to the fact that he works with CECI. Our theory is that he met the plane when it landed in Port-Au-Prince with aid supplies and had brought their son with him and then he asked the soldiers if they would take him back to Canada with them. C's 17 year-old had not been willing to leave Haiti before yesterday, but he was finally scared into going by the three aftershocks that rattled the country yesterday. He was flown from Port-Au-Prince to Ottawa with the armed forces and then took a commercial flight into Montreal. C is so relieved to have him here, she's now hoping to be able to get her daughter over soon, but that is proving to be a more complicated situation since she is a special needs child and her caregiver is not part of C's immediate family.

...forgot to buy salt on the way home, it's a good thing I was having pasta with a ready-made sauce and didn't need any! I'll have to remember to buy some tomorrow when I go buy my shampoo, there's a grocery store on the way.
Posted by Karine at 22:28

Email ThisBlogThis!Share to TwitterShare to FacebookShare to Pinterest
Labels: earthquake, montreal, Today I...