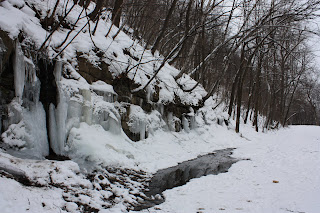 ...found out that my position, which has been full-time but temporary for about a year may become permanent by the end of the month. I'll keep you posted on how things go.

...called the techie about my obscenely noisy computer. The fan goes all.the.time!!! I can hear it clear at the other end of the office. He told me that there really wasn't anything he could do about it, that he had no other computer to give me and when I told him that I wasn't looking for a new PC, just a solution for the fan and that my mom's PC had had a noisy fan once and that her techie fixed it within ten minutes, he told me that I would have to speak to the director of personnel about it! Ugh...he's never been like that with me before, maybe he just got up on the wrong side of the bed? Anyhow, a colleague suggested that I try sticking it under my desk so the darn thing wouldn't be right next to my head all the time, but it didn't really make that much of a difference, it still made my ears hurt and wore me out, I really don't know what I'll do about it.

...went Downtown after work and got myself an exercise mat and a Pilates DVD. I gave the workout a try when I got home and it really is a full body thing, which I suspect may result in full body pain tomorrow lol I'm going to try and do the workout two to three times a week and see who it goes, it's supposed to be great for muscle tone!

...was a witness to Montreal's wacky weather. For anyone reading who has never been to Montreal, all sorts of things fall from the sky here: sometimes rain, sometimes snow, sometimes ice, sometimes a mix of rain and snow and sometimes something that can't quite decide whether it's snow, ice or rain and often these weather conditions will come on when you least expect them, like this afternoon. It was -7 (Celsius) when I left work and a colleague came out behind me and said 'Hey, that's weird, it looks like it's foggy!' and I looked into the parking lot and said 'Nope, it's not fog, it's freezing rain, look at the people scraping the ice off of their cars!' Now you see, normally freezing rain happens when it's right near the freezing mark, usually between -2 and +2, but not when it's nearly -10! So there's your wacky Montreal weather 101 class today, always expect the unexpected!
Posted by Karine at 21:51