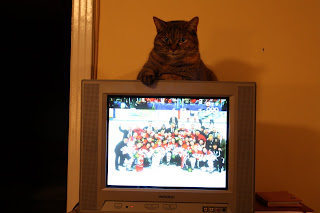 Cameras Critters this week is one of a series of shots I took of Magique lying on top of the television during the women's gold medal hockey game a few weeks ago which, of course, Canada won :o) I apologize to my American readers for my blatant pride, but on top of my being very happy that our hockey team is incredibly talented, a few of its players also happen to play or to have played for McGill University, my Alma Mater :o) Anyhow, I always make a point of following the women's hockey tournament during the Olympics. I actually enjoy it more than the men's' tournament because for the women, the Olympics is the biggest tournament in their careers since they don't play in the NHL although, might I add, Kim St-Pierre, one of the goal tenders for team Canada (and McGill University) stood in for the Montreal Canadiens during one of their practices last year because both their goal tenders were out and she did an amazing job, so the guys said and they didn't hold back on her at all. But all this is beside the point, the point is: doesn't Magique look proud of our women's hockey team too? :o)

Have a great weekend and remember to make it even better by going to see all the other Camera Critters over here.
Posted by Karine at 10:48