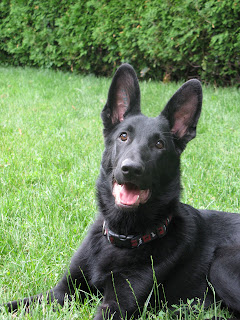 ...called my mom to see how she was doing because she had to bring a rescue dog that she had decided to keep back to a shelter. The dog in question was a seven year-old female German Shepherd who was very sweet, but my mom 's own female German Shepherd ended up not being able to get along with her and fights were beginning to break out between them. The poor dog has been to so many homes that she had an absolute horror of being left alone. It's heartbreaking that she couldn't keep her, but she's a very sweet dog so we're hoping she'll find another home. Right now it's just heartbreaking to think of her by herself in a cage back in the kennel.

...giggled when my mom told me that Griffin, the fine looking fellow in the above photo, stole the steak she had made herself for lunch while she was on the phone with me with her back turned and ate it whole, even though she was very upset about it. I stopped giggling and apologized and then promptly broke into fits of giggles in the middle of my office upon hanging up the phone. Sorry mom, but when it's not your lunch being stolen, it's the sort of story that's good for a laugh :oJ

...had a very quiet day at work, which is good because I was having a hormone induced day of feeling slightly under the weather. Yup, PMS is crappy, but it's only about three days out of the month so I can deal with it...most of the time.

...found out that we won't be singing Morten Lauridsen's Ave Maria at my concert in June, but his O Magnum Mysterium which is just as lovely I find :o) You can go and listen to it here
Posted by Karine at 21:43